It's the final week of the NOT back to school blog hop and this week's topic is a day in the life.  So ya'll want to know what a day in the life is like (otherwise you wouldn't be here reading this right now right?).  So here it is, the ugly truth.

I am NOT a morning person.  I resemble this:

until about 10am.  Some days even longer (today was one of the longer days).  And caffeine really has no effect on me so I can't even down a pot of yummy coffee for any kind of benefit.  So KOJ is up and out the door at 6:30 on Mon and Fri and 7am on the other three days.  When he leaves he comes and kisses me goodbye and lets me know who's awake and what they're doing.  Princess has been thinking that 6:30-7 is a great time to wake up so I'm not getting much sleeping in time lately.  Usually Sierra and I head downstairs by 7:30.  The last few days I've been doing the shower thing right away followed by breakfast before I even SIT down because if I sit down first I'm a goner till at least 10.  If I do this I'm pretty awake by 9am.

So here's what an "ideal" day looks like (some days this is real and others it just doesn't happen - I have four small children who are completely unpredictable at times).

9am - head upstairs, monkeys monkey around in their room, mama rides her bike for 10 min, does some stretches. (this did NOT happen today)

9:30am - princess down for nap, monkeys and mama downstairs  (this did happen today lol)

9:45am - group time at school - we do our calendar, weather chart, and days of school sticks in plastic cups.  Then we move to the big table in the dining room and we do one or two activities as a group (including Squirrel who mostly has his own curriculum).  I also read a small portion of Squirrel's NIrV translation bible out loud, we talk about what it said, and I pray for our day.  Group time looks kinda like this: 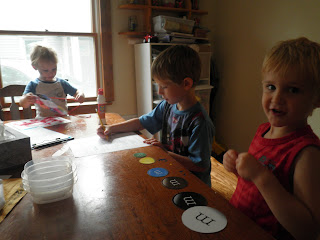 10:30ish sometimes later - I have Squirrel start his math and sometimes his journal page and I take the other two in the playroom and we talk about our letter of the week do their school stuff.

Today it was about 11:30 before Squirrel was ready to move on in school subjects BUT I don't think he started math at 10:30 either, it was definitely later today.

Then I focus on Squirrel and shoo the other two outside or put on a Leapfrog video or both because schooling Squirrel alone can take some time.

Today at 11:30 Squirrel and I started his spelling and Princess woke up from her nap,
at 12 we broke for lunch.
Spider went down for a nap at 12:30 and I did his before FIAR book with him when I tucked him in
At 12:45 we finished spelling which took about 3 minutes and then I had him clean up his spelling supplies.
At 1:20 I finally tossed the cut up veggies and meatballs in the crock pot for dinner and ate a mostly cold lunch of pizza bagels.  Then I zoned out for a bit.
At about 2:30 I did reading with Howler and
at about 2:50 I did grammar with Squirrel.
At about 3:20 I started hunting for my car keys because we had to go to my mom's this afternoon for a while.  At about 3:51 I finally found my keys and went out and headed off.

Normally in the afternoon I do FIAR with the older two while Sawyer is still napping and after I've put Sierra up for her 2nd nap which she usually takes around 2:30/3pm.  But because I knew we were leaving I did not put her down for her 2nd nap and we did not do FIAR today.  I've decided to do FIAR books for two weeks, reading it at least 3 days one week and 2 the other and any other days are gravy.

I don't feel that our current schedule is very efficient but it's only the 2nd week in and I have three boys at three different grade and skill levels and it's a terribly interesting juggling act.  I figure I'll keep juggling until I finally catch all the balls.  Ideally I'd like to have an hour of free time in the afternoon and I think once I have princess on a one nap a day schedule and she and Spider are napping at the same time that will be attainable but right now it just isn't.  I'm also going to try to plan more crock pot meals and things I can prepare ahead and just pop in the oven so that I'm not trying to rush around prepping dinner after such a long day.

And can I just say that writing and the reading about my own day just gave me a mind numbing headache.  Complete chaos.  Complete, but it's my life, what are ya gonna do?

Check out all the other day in the life blog posts by clicking this: