I'm running a week or so behind on blogging.  I am aware.  But life has been crazy busy.  My second born monkey turned 5 this past Friday and five in our house means a big, huge party.  I didn't have much time or energy to even think about blogging.  No worries though because I will certainly post all about the party and the crafts we made for it.

But today is Tuesday and so I will share a few things that our tot Princess has been up to lately. 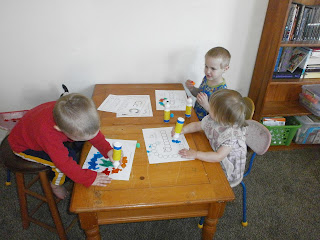 The do a dot markers are one of her favorite things to do.  I found these bingo markers at the dollar store and stocked up.  I put a towel bib on her because as we saw the last time I posted a tot school post she can sure make those things splatter. 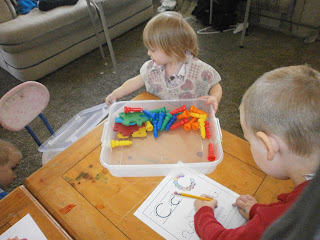 I put some pegs and peg bases (transportation shapes) in one of her bins.  She spent most of the time though trying to put the lid back on by herself. 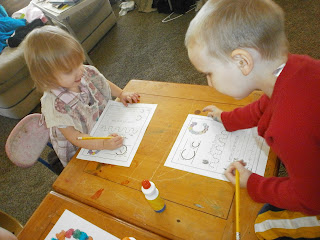 Not to be outdone by her brothers (regardless of the fact that writing is actually age appropriate for them and not for her) she had to have her own writing page. 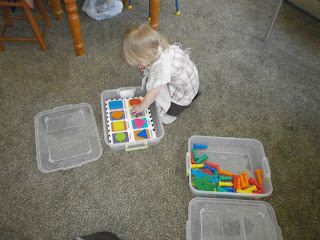 Then she played with her chunky shape puzzle.  I love these.  She has this shape one and a zoo animal one.  I love that the pieces are actually thick enough to play with standing up as well as in the puzzle. 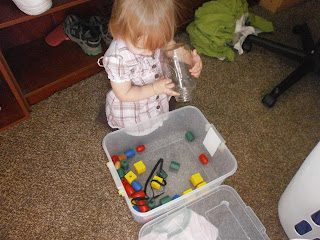 Then we got out her lacing beads.  She didn't so much get the lacing part but she had a blast dumping the beads out into the bin from the jar they were in. 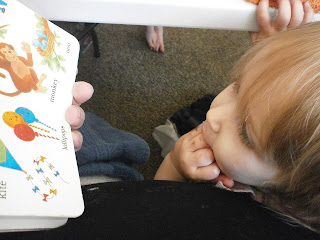 And of course we read a book together.  She loves to read.  (We have actually read several books together in the past couple of weeks this was just the only one I snapped a pic of.) 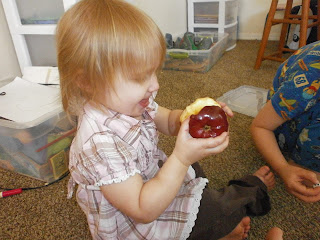 Stealing and eating a brothers apple.  She's such a doll. 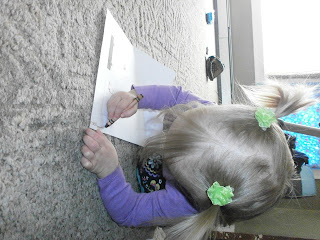 She LOVES to color, I don't think a single day goes by that she does not color.  She is very diligent about it and we actually found that she can make very nice circles.  Not bad for 22 months old. 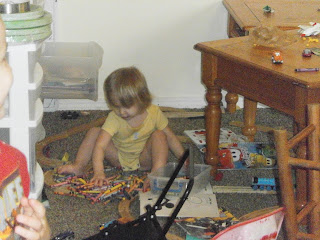 She also enjoys dumping the crayons out once in a while.  She's usually pretty good about helping clean them up though too. 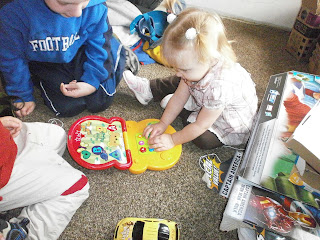 Playing with her new little shape and letter computer from Grandpa Richard.  Her favorite feature is the "space bar" which makes it play music that she bobs around to. 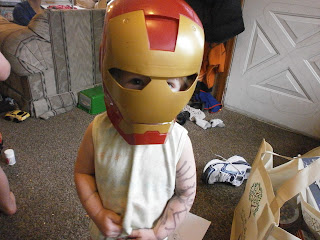 And she plays dress up.  My little Iron Girl.  She's so cute.

And those are just a few of the things that my little tot Sierra has been up to for the past two or so weeks.  There will most likely not be a tot post next week as my camera is broken.  Again.  So until I get it fixed or replaced the blog will be sorely lacking in picture posts.

I'm linking this post up with the tot school link up at Confessions of a Homeschooler so head over and check out the other great tot activities in blog land.  I'm also linking up with the Tot School linky party over at the fabulous 1+1+1=1 blog so go over there to see even more great tot school blog posts!  I actually got the inspiration to start tot school with Sierra from both of those blogs.