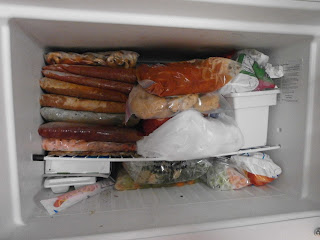 I've tried numerous things to cut our budget.  I've long meal planned and stockpiled really good sales.  I've stopped couponing extensively (this caused me to buy things we didn't really need).  I've come to the end of my rope in this area.

Every night I have the same problem.  Come 4:30/5pm it's time to work on getting food on the table. Often I've forgotten to thaw the meat I need.  Sometimes we're missing an ingredient.  Sometimes whatever I was going to cook doesn't sound good anymore.  But most often I have screaming hungry children, a disastrous house, and little energy left to deal with dinner.

Enter the new great meal prep experiment.  I read other blogs.  Often.  Usually I find them through pinterest.  The other day I was looking at a pin and here was an amazing idea.  Making a whole month of meals at once and freezing them.  Now I've heard of this before.  Not a totally new concept to me.  But one thing stopped me.  Freezer space.  I don't have a deep freeze - I NEED one but I don't have one.  I have limited space in the freezer in the top of my fridge.  But when I stumbled across a blog and then another and then another of women making all of their meals as crock pot meals I knew I needed to try it.  So I read several of these blogs to get inspiration.  Printed out the recipes that appealed to me.  Meal planned a month worth of meals - several of the meals I'm doing two of the same thing.  Wrote out a HUGE grocery list item by item through the menus.  THEN I went shopping in the kitchen.  Checked off the things that I already owned and gathered the canned stuff I'd be using in a basket for easier access.

Then I re-wrote my list putting things into categories so I wouldn't miss anything as I shopped through the stores.

Then on June 11th, I loaded up 4 kids, one package I needed to mail, my bag of empty cloth shopping bags, my purse with my list and a diaper (cause ya know, still a mom) and the kids and I headed out.  We conquered the post office first and quickly.  Next we went to Aldi followed by Walmart and finished our shopping foray at Meijer.  And about 3hrs after we set out we arrived home.

By that time it was lunch time.  My kids thought they should be fed so I fed them and since the older two boys had a ball game that night I napped all three of the younger kids and let Kayden play on the computer.  Then I proceeded to spend the next hours peeling and chopping carrots, washing and chopping mushrooms, labeling all the baggies.

Took a break for dinner (which I had conveniently put in the crock pot before we went shopping in the morning) and the boys' ball game.  Then I spent another few hours, chopping onion (thank goodness for a food processor!), chopping celery, browning ground turkey, and FINALLY I was able to start completing some of the meals.  And when I finally crashed into bed last night just after 12am I had completed a bit more than half of the meals with most of the vegetables prepped in the remaining bags.

This morning I set about to finish out those meals.  I took one baggy (two if it was a double recipe) at a time and I put whatever was missing into it.  Then I stuffed them all back into the fridge because our freezer is full to the gills.  I have two meals that I haven't completed the prep work on but to be honest I'm plum exhausted.

Ok so let's see.  What do you all want to hear about this little adventure?

1 - This month I'm going to plan the meals I'll make next time way ahead and have my baggies labeled before the day of shopping and prep.  It didn't take a huge amount of time but that 30 - 45 min could have been better spent chopping.  I would have done it ahead this time but I didn't have any baggies in the house.  I bought three boxes of 30 baggies though so I'm set for next month.

2 - I'm going to double as many recipes as humanly possible next month.  Variety is nice BUT it's easier to prep two or three bags of the same meal at once.  Looking at one recipe results in two or three completed meals at a time and the ones I doubled were my favorites to put together for this reason.

3 - I'm going to do my shopping and veggie prep on one day and the meat prep the next day and then put everything all together on the third day next time.  I need to spend time with my children after all and this way maybe I can keep things a little neater and tidier.

4 - I'm going to write out the recipes we'll use regularly on recipe cards.  I think that will make it easier on me.  Don't know why I think that but I do.

5 - when I write my list I'm going to differentiate between chopped onion and sliced onion etc so I can just prep the vegetables and measure out accordingly.  Last night I had to keep flipping through the recipes to see which ones needed slices of onion and which one needed chopped onion.  It was a HUGE pain.  Same with the carrots, and other veggies.

Things I would do differently if I had a deep freeze:

*I'd make three or four of our favorite recipes at a time.  This way we could rotate them in another month or two down the road but only have to prep them once for that amount of time.

Ok so really that is the only thing I would do differently for this if I had a deep freeze. lol  I just don't have the space to make more than I made last night and today.

Now on some of the blogs I read as inspiration they chopped up the potatoes and put them in the bags at this stage.  But I was too scared to ruin the meals if the potatoes went bad or something once they were cut so I have the potatoes but I'll wash and chop them on the day of cooking.  Everything else though I chopped right up and tossed in the bags - peppers, zucchini, onion, carrots, fresh mushroom.  Obviously we haven't eaten them yet but as they won't be in the freezer any longer than 30 days I'm sure they will be fine.

Now in the end I completed 23 meals and have two more half prepped.  I also have ground turkey in the freezer for a few meals - tacos and the like to fill in the last 5/6 meals we'd need in a one month span of time.  We'll also have some chicken tenders to use for a non-crockpot meal too.

I do think that going this route has saved our grocery budget but as I'm exhausted and my brain has stopped functioning and my children are begging to bake cookies I'm going to sign off now.  But come back tomorrow and I'll do a cost breakdown of my grocery purchases and see how the budget does in fact look.

In the meantime for recipes and more information check out the links below.


These are the blogs where I got my most recent inspiration:
Kojo Designs
Ring around the Rosies
The Test Kitchen
Posted by Samantha at 1:26 PM